John Dorsey has been proactive in his bid to revive the fortunes of the Cleveland Browns.
The Browns became the second team in NFL history to record a 0-16 campaign in 2017,
resulting in the departure of Sashi Brown. Hue Jackson and the majority of the coaching staff
managed to remain in their positions, despite the horrendous season, and now have the
opportunity to restore their reputations under the new regime.

Dorsey was surprisingly fired from his position at the Kansas City Chiefs before the 2017
season. After removing Brown, Cleveland moved swiftly to secure the services of Dorsey,
who played a huge role in guiding the Chiefs back to relevance with Andy Reid after a 2-14
campaign in 2012. It only took one season to turn Kansas City into a playoff outfit, therefore
it will be worth considering a free bet through Oddschecker from SkyBet with the Browns
backed at 7/1 to win the AFC North.

There are question marks surrounding the division, with the Pittsburgh Steelers once again
failing to get over the line in their quest to reach the Super Bowl. Ben Roethlisberger and
Antonio Brown are getting older and further removed from their prime years. The Baltimore
Ravens’ offense has been poor for the last five seasons, while the Cincinnati Bengals have
been inconsistent to say the least. Cleveland cannot get any worse, starting from rock bottom.
They played some of their divisional matches tough and were not far away from at least
notching a handful of victories.

Dorsey has made intriguing moves, and although a divisional crown could be beyond them
next term, Jackson’s men could transition back into relevance to at least put pressure on their
rivals. We’ll now break down their signings thus far and see where they translate into the
roster on both sides of the ball. 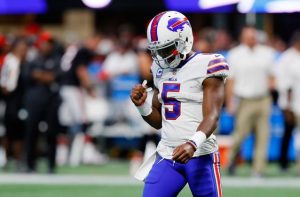 The Browns’ most significant move before free agency was to secure the services ofquarterback Tyrod Taylor from the Buffalo Bills. Dorsey sent the club’s third-round pick in
the 2018 Draft to acquire the 28-year- old, whose time in Buffalo was deemed to be at an end after a poor term under Sean McDermott. Taylor moved to the Bills for the 2015 campaign
and has been a steady operator, but could not turn them into challengers in the AFC East. He
has specialised in limiting his turnovers, throwing only 16 interceptions in his three seasons at Orchard Park. For context, DeShone Kizer threw 22 interceptions in the 2017 campaign.

Taylor should provide a solid option for the Browns as their starter for next season, although he’s not quite at the level where he can carry them into the playoffs. The 28-year- old will act as the bridge signal-caller in anticipation that Dorsey uses the first-overall pick to select a quarterback. Kizer’s days are over in Cleveland after just one term. He was used in the trade
to sign Damarious Randall. It was unfair of Jackson to throw him into a struggling outfit
when he was such a raw prospect. The 22-year- old lands in Green Bay, where he could revive
his career in the shadows, developing behind Aaron Rodgers.

Kizer will look with envy as the Browns secured a safety net for Taylor. Slot receivers are
often the bail out weapon for a quarterback over the middle of the field. Jarvis Landry is one
of the best in the business, developing into a catching-machine with the Miami Dolphins.
Cleveland will pick up his franchise tag, sending a fourth and seventh-round pick to acquire
his services. With Corey Coleman and Josh Gordon on the outside, and Landry and David
Njoku in the middle of the field, there’s talent there for Jackson and Taylor to work into an
offense that could provide a credible threat in the AFC North. Add the possibility of Saquon
Barkley with the fourth-overall pick – then the Browns could well be behind only the Steelers
for quality on offense in the division. That’s not a bad starting point for a team that needs an
identity.

The Browns’ defense is starting to build, with the addition of Randall solidifying the
secondary. The cornerback has endured an up-and- down NFL career since being selected in
the first round of the 2015 Draft by the Packers. Opposite Jason McCourty, the duo could
form a solid tandem with the prospect of having to overpay at the position. There’s depth
behind the tandem with Briean Boddy-Calhoun and Howard Wilson available, while Jabrill
Peppers has experience in the slot. Cleveland could even bolster their ranks with a player
such as Malcolm Butler available in free agency or through the draft using one of their picks
in the top 100. The linebacking corps looks fairly set, with Jamie Collins poised to return to
action in 2018 after missing time last term. Christian Kirksey and Joe Schobert were solid
players and should continue to be viable options in the middle of the field. However, Dorsey
could use capital to bolster the ranks, with a great deal of value available in the upcoming
draft.

Myles Garrett lived up to expectations last season, but there will be pressure on him to
develop into an elite pass-rusher. He notched six sacks in 2017 and the Browns will be
expecting him to reach double figures next term. Carl Nassib and Emmanuel Ogbah also
boast talent and could form an impressive rotation, while there are elite players available that
Dorsey could select. NC State’s Bradley Chubb could form a terrifying bookend with Garrett
if the Browns go with defense with the fourth-overall selection. Larry Ogunjobi impressed
enough in the middle of the defensive line for Cleveland to trade away Danny Shelton to the
New England Patriots. There’s talent to work with for defensive coordinator Gregg Williams
and pressure on him to deliver a stout unit in 2018. 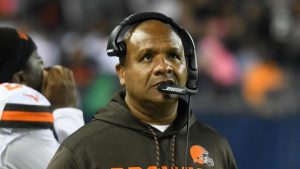 Turnovers have killed the Browns at the quarterback position in recent history. Kizer threw a number of back-breaking interceptions last season, spurning glorious opportunities to avoid the winless term. With Taylor in place, there’s hope that those days will be in the past,
although the 28-year- old will not be winning many games with his arm alone. The Browns
will have to play complementary football and make the most out of their receiving corps
along with a potential star at running back in Barkley should they move for the former Penn
State man. Jackson underused Isaiah Crowell last term and has to embrace a balanced offense to take pressure off the quarterback position.

Defensively the Browns could have All-Pro talent in at least two levels of their defense.
Garrett has to take the next step forward and follow in the footsteps of Joey Bosa and Von
Miller to reach that level of excellence to justify the first-overall selection last term. Collins
has proven in the past that he is an elite linebacker, although it may take him for him to
regain his old speed and vigour in the middle of the field. The secondary could be the
weakness of the team, although there is capital there to address the situation.

Jackson and his staff have no more excuses. Dorsey has put enough talent at their disposal to
at least win six matches. Given the tight nature of some of their divisional games it could be
enough to propel them to a .500 record. That would be huge progress for one season and
eradicate some of the damage dealt to the brand from the last campaign. The long-term
success of the club is still in the balance and hangs on the selection of an elite quarterback
with the first-overall pick. The decision to pass on Carson Wentz and DeShaun Watson could
haunt the franchise for the foreseeable future should they fail to get the right signal-caller
with the top selection in April.